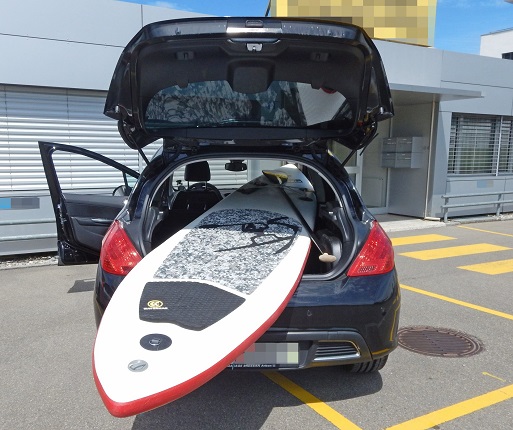 Everybody’s seen it before: A car rolls through the streets with its boot open. The load usually appears to be insufficiently secured. That begs the question: Transport with an open boot – is that allowed?

The picture shows a vehicle with an insufficiently secured surfboard protruding from the rear of the boot. Of course, that’s not allowed. What’s allowed and what’s forbidden. These are the legal bases in Switzerland.

Vehicles must not be overloaded. The load must be positioned in such a way that it does not endanger or inconvenience anyone and cannot fall down. Overhanging loads must be noticeably identifiable during the day and at night.

If the load, individual parts or a trailer protrude sideways and is not easily visible, the outermost parts need to be marked in an easily identifiable way using pennants or panels during the day, and at night and when the weather requires it using lights or reflective devices that illuminate white to the front and red to the rear; the reflective devices must be not more than 90 cm above the ground.

The end of load or individual parts projecting more than 1 m from the rear of the vehicle must be marked with a signal device (sphere, pyramid, etc.) with a projection area of approximately 1000 cm2 along the longitudinal axis of the vehicle and with red and white stripes of approximately 10 cm in width and with reflective devices or reflective material.

In principle, it is permitted for the load to protrude out from the boot and exceed the limits of the vehicle. But there are a few points that need to be considered in order to stay in line with the Swiss Road Traffic Act.

The biggest problem in this special case is the open boot. This must be secured in such a way that it does not move and cannot endanger anyone.

It is a tricky matter and should be avoided where possible. You should save yourself the risk and look for another alternative to transport your load from A to B as safely and easily as possible.

Do you know friends who transport things with their boot open all the time? Then share this post with them.