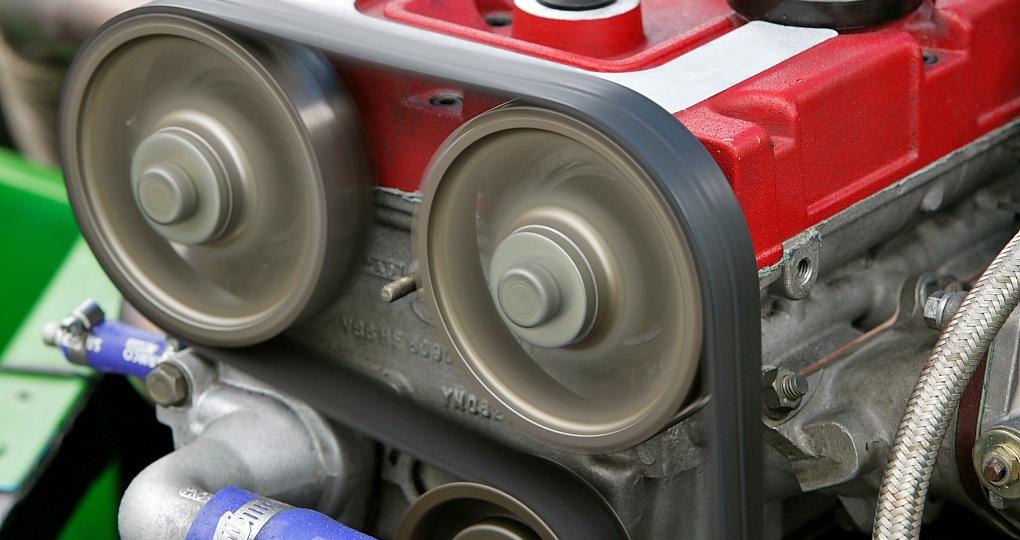 Everything you need to know about the dreaded cambelt change

Just like the brakes, the cambelt is an important part of your car. Unlike the engine, the cambelt wears down and should be replaced every so often. We’re here to explain when and why you should go about changing your cambelt.

When should you change your cambelt?

The cambelt is responsible for engine timing, and is part of a highly precise combustion process. It connects the crankshaft to both camshafts, which control the valves of the engine.  The timing of the valves depends on the speed of the engine and is managed by the camshafts.

The crankshaft changes the linear movement of the pistons into rotary movement. The camshafts control the engine valves.

The amount of time between changes of the cambelt can vary greatly depending on the model and manufacturer. The operating life of a cambelt is at least 60,000 kilometres.  In addition to mileage, the age of the cambelt plays an important role. Large shifts in temperature can also affect operating life.

Cambelts found in many new models now last much longer. The mileage expected of a cambelt in a VW Golf (manufactured in 2010 or later) is around 210,000 kilometres, for example.

You can find out what to expect from your car by checking your vehicle service book or asking your mechanic. Changing the cambelt really isn’t something to worry about with new cars. If you’re buying a used car, however, you should find out about the state of your cambelt during its next service.

Why is changing a cambelt so expensive?

The cambelt is one of the most expensive parts of an engine. It’s hidden deep inside the engine and essentially holds all of the moving parts together, making sure that all of the gears are turning as they should. This means that you have to take apart half of the car before you can actually get to the holy grail that is the cambelt.

A cambelt change is the heart surgery of car servicing. The process is different for every make of car, and often requires special tools which are specific to that brand. What’s more, if the mechanic makes a mistake, the consequences can be dramatic.

Can I skip changing the cambelt?

The cambelt is made from a special rubber compound.As the belt gets older and continues to be strained by the engine, it becomes hard and brittle.The amount of time a cambelt has left can be determined by the manufacturer through an elaborate inspection procedure. It should therefore probably last a little longer than the manufacturer claims. Taking such a risk is never a good idea, however.

Should the cambelt tear, all of the attached parts will keep spinning at different speeds. The pistons and valves will lose their timing with one another, which can lead to serious engine damage. Depending on the vehicle, this damage is often not worth repairing. A replacement engine costs thousands of euros.

Do I also have to change the coolant pump along with the cambelt?

You don’t have to, but you should.The coolant pump is driven by the camshaft and pumps coolant through the engine, heating element, radiator, and so on. A defective coolant pump will mean that the engine can no longer be cooled, and it will begin to overheat. This doesn’t just boil the coolant, it also causes severe damage to the sensitive mechanical parts and seals in the engine. In the worst case scenario, this can lead to irreparable engine damage.

Depending on the manaufacturer, coolant pumps cost between CHF 100.00 and 400.00. Yes, it’s certainly expensive. But the time spent installing and removing the cambelt costs considerably more. Therefore it makes sense to do both at once.

If you only replace the cambelt and the coolant pump breaks down shortly after, you’ll need to pay double.

Do you need a service? Then you need Carhelper. We will send you free quotes the next time you get your car serviced.

How much does it cost to change the cambelt in an VW, an Audi or a Skoda?

You can find examples of prices for frequently purchased car models below. These examples serve as an indication and can differ slightly depending on model and location.